Nonpoint source (NPS) pollution of groundwater: what is the impact of aquifer, soil, and land use spatial variability on our ability to predict future nitrate, salt concentrations?

On the other hand, concentration levels of some key NPS contaminants (salinity, nitrate) vary within a limited range (<2 orders of magnitude). which is in contrast to many industrial pollutants of groundwater - they may be many orders of magnitude above drinking water levels of concern.

Also, significant mixing occurs across the aquifer profile along the most critical compliance surface: drinking water wells with their extended vertical screen length.

Here, we investigate, whether these two unique NPS contamination conditions reduce uncertainty such that simplified spatiotemporal representation of recharge and contaminant leakage rates and of hydraulic conductivity are justified when modeling NPS pollution.

To test this, we start with very complex model setup and compare that to outcomes from more simplified ("homogenized") model setups, when it comes to the representation of spatial and temporal heterogeneity in the groundwater flow and transport model.

We employ a Monte Carlo-based stochastic framework to assess the impact of model homogenization on key pollution management metrics for NPS contamination. In Monte-Carlo simulation many random, realistic locations of an aquifer system are simulated sequentially, and the results are aggregated using statistical analysis.  Thus, we obtain, for example, histograms of concentrations at wells, for each month, year, or decade. These histograms represent the probability distribution of salinity or nitrate at production wells, and how they change over time.  We also consider the travel time of pollutants, such as salts and nitrate, from the water table below a field to the well screen situated somewhere downstream in the aquifer.

In contrast, results indicate that the uncertainty assessment of travel times and capture zone delineation is rather sensitive to aquifer heterogeneity. Full homogenization of the aquifer heterogeneity would significantly affect travel times and capture zone delineations. Surprisingly, then, regional statistics of well concentration time series are fairly well reproduced by a series of equivalent homogeneous aquifers.  This suggests that simulation models may not need to fully represent the details of aquifer heterogeneity to grasp a good representation of the distribution of pollutants across wells in a region.

The results also highlight the prominent role of NPS solute mixing along well screens, which appears to dominate the salinity and nitrate signal in a well much more than aquifer heterogeneity.  In other words, a simulation model should focus on properly capturing:

This would be more important than representing aquifer heterogeneity in much detail.

The results also confirm, that the source area of an individual well (and the answer to the question "Who has contaminated my well?") is highly uncertain, unless detailed hydrogeologic investigations reveal the aquifer heterogeneity and the exact groundwater flow conditions. This is a lesson learned already in over four decades of groundwater assessment and cleanup at thousands of industrial and other groundwater contamination sites across the U.S. and elsewhere. 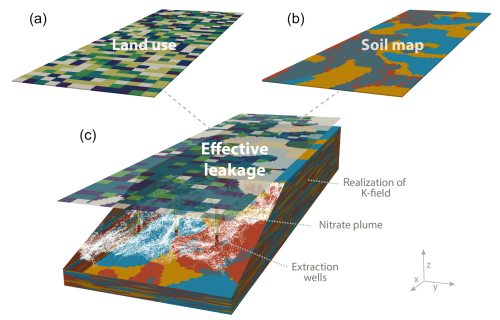 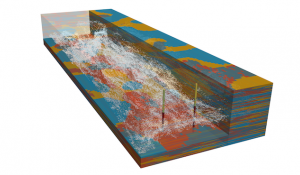 Authors
Christopher V. Henri
Thomas Harter
Visualization of management metrics and of the impact of land-use change (LUC) on contaminant level predicted in extraction wells in a stochastic manner.